Published in Reports on 2nd December 2018 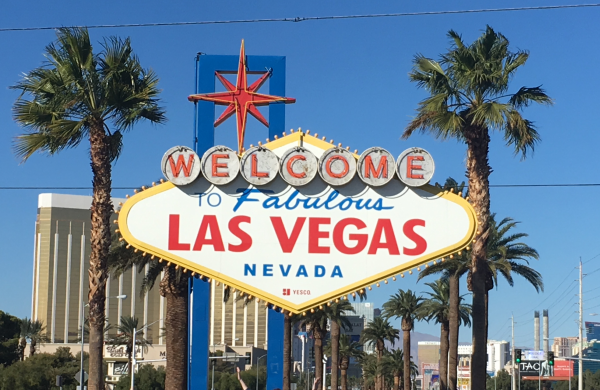 Driving over 30 minutes to run a 5km race would be considered excessive by many. So flying 8000kms to run a race may be considered plain and utter madness. Possibly even justify being locked up with the key thrown away.

However, throw in making a holiday out of it, two cities, a bit of sight-seeing and two races and it might result in being locked up for a shorter sentence.

A group of hardy warriors was assembled- four Athenry AC members- Bernie Rogers, Kieran Walsh, Sinead Walsh and myself. Representing Sligo and Ireland Oisin and two spectators/shoppers bolstering the US economy and making it great again Brian and Sarah.

40,000 people ran the Las Vegas Rock n Roll Marathon series with an age range from 12 to 86. This is the only time the Vegas Strip gets fully shut down and closed off to traffic each year.

The schedule for the weekend was a 5km race on the Saturday night with the option of the full marathon/half/10Km race on the Sunday.

I was the only member from our group signed up for the 5km on Saturday. A couple of hours before the 5K race I ordered a chicken sandwich in a restaurant as my pre-race meal. Expecting to get a BLT or something similar I got a surprise when the waitress handed me a chicken burger and chips that could see a large family through the Christmas.

I threw on the Athenry singlet and made my way to the starting point. The race was scheduled to begin just as the sun was going down. As I looked around at all the skinny bodies and shiny running gear, I started to feel a little out my league. After a couple of high-5s from strangers, and a “You got this Athenry” from a ferociously over enthusiastic guy with a sweatband, I started to make my way up the corral a little. As I looked at the others gear, I suddenly realised I had made a mistake. On the application form I must have filled in Athenry instead of my name. Everyone had their names under their number and I was just named “Athenry”. I guess it added to my pale white intrigue. The Irish Ronaldinhio.

I pushed my way up to the front anyway remembering the Tommy Tiernan sketch about Declan Moffet from Glenamaddy- only minus the ripped Saw Doctors t-shirt. Looking at the arms of the lad next to me I wondered if he would even be able to lift the burger I had eaten before the race.

The pageantry was something else. A young girl with a big voice went up to belt out the Star-Spangled banner and it was hard not to get goose-bumps. It was also starting to get a bit chilly as the sun had disappeared in the cloudless Nevada sky.

The gun went off and a bunch took off like bullets. I took it handy tucking in about 15 from the front. There was a band every kilometre- the speakers blaring out on top of us, feeling the rhythm shake through your bones as you ran past. Looking around at all the lights it certainly was an experience and I started to work my way up the field a little as a few of the early adrenaline gang faded. I was 8th man home with a 17:15. First lad home was already finished the tea and planning his next race after running an impressive 15:10.

On Sunday I ran the 10km. It started a bit earlier in the day. The route was a lot nicer than the 5km- taking in the Old Las Vegas initially and making its way to the modern strip and finishing outside Caesars Palace and the Bellagio fountains. I came home in 6th with a 36:16. There was a decent spread afterwards but they could learn a thing or two from what our club puts together on Stephens Day!

Oisin powered home in the 10km saving a sprint finish for the cameras. We then set up camp watching the marathoners and half marathoners pass the finish line. Countless Elvises, A couple of Statues of Liberty, a lot in wedding dresses but only one Sinead and Bernie in the half marathon. They came towards us, milking the plaudits from the crowd and hi-fiving everyone. Kieran finished the marathon muttering he regretted the extra beverage the night before.

Overall a mighty weekend of running with a great gang. 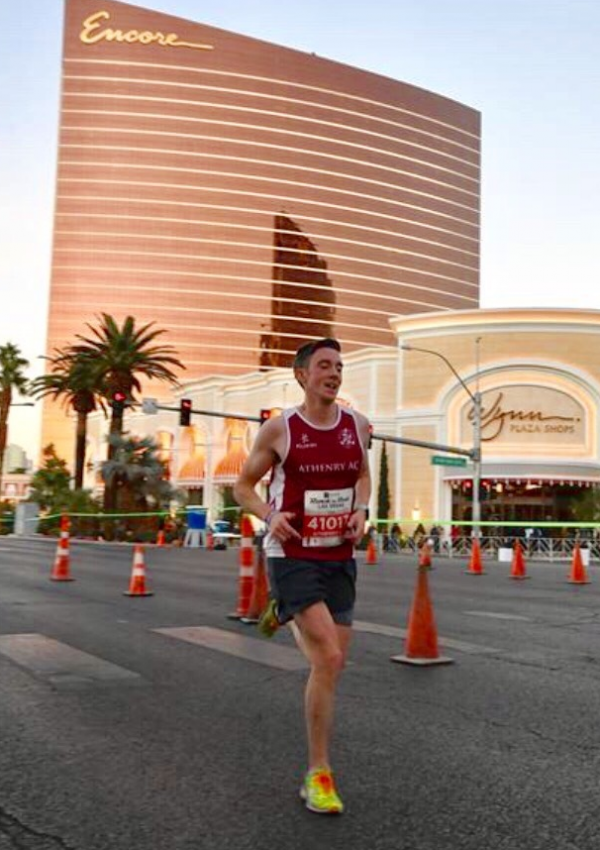 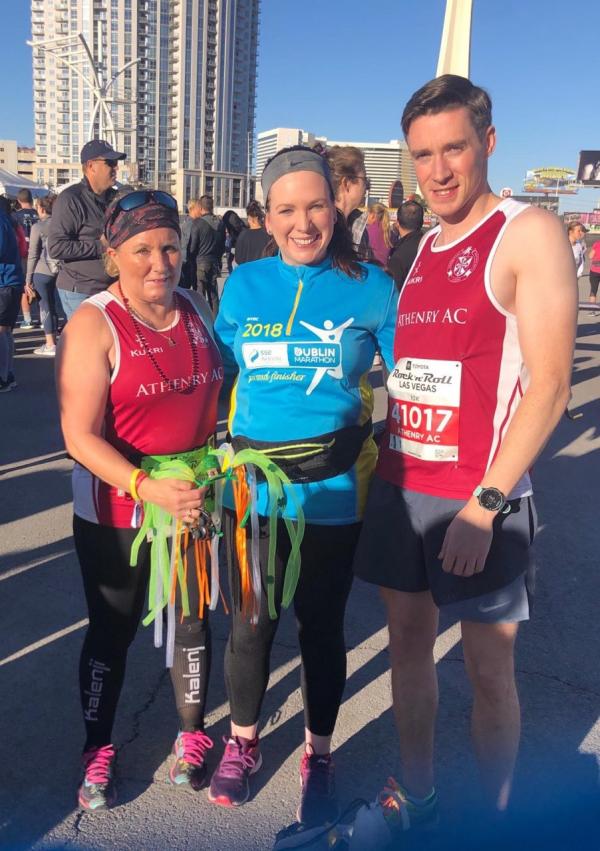 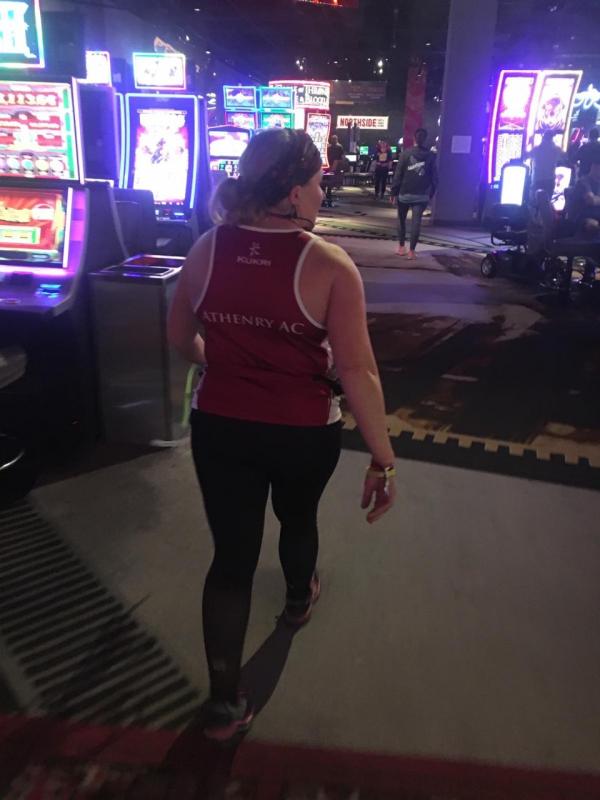 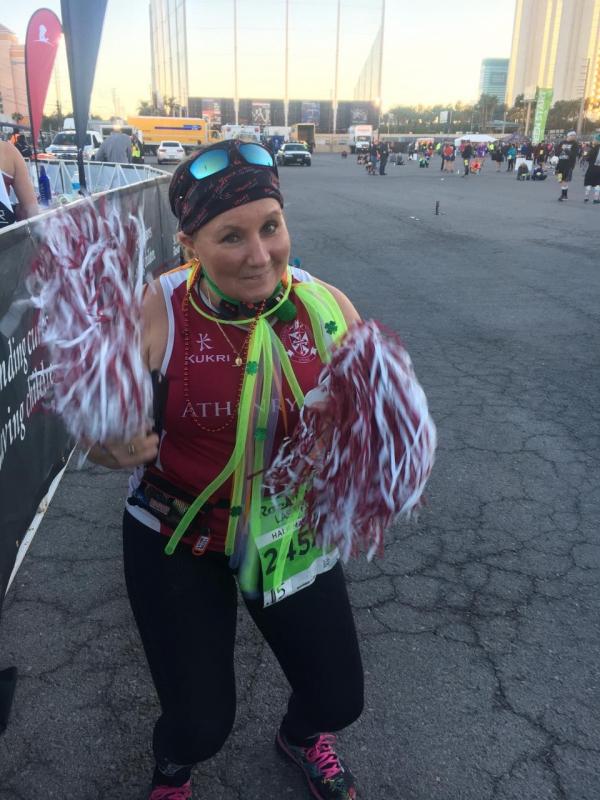