Published in Other News on 22nd November 2005

Entries for next year's Failte Ireland Connemara Marathon Races are well ahead of last years numbers even at this early stage in the build up to the races. 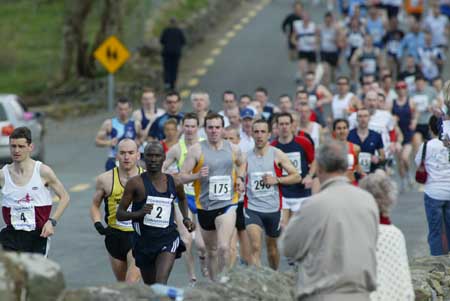 Race director Ray O'Connor said today, "We've been blown away with the level of interest from all over the world. We have triple the number of entries on hand than we did at this point last year." The Connemara Marathon, Half-Marathon and Ultra Marathon have rapidly become 'must-do' events for many runners, both from Ireland and further afield. Ray and his race team recently exhibited the race at the 'expos' which preceded both the Dublin and New York City Marathons. "The atmosphere around the stand in both venues was electric", said Ray O'Connor. "We were showing some video footage of last years race and it just seemed to rekindle all the enthusiasm people have for running in Connemara."

At this pace it seems absolutely clear that these races will fill completely early in the New Year and so the message is clear. If you want to run, enter soon.

This is Jim Boughton, your friend from Iowa USA who enjoyed the hospitality of the Athenry group at this summer's Streets of Galway run while I was on holiday. Found your website and I've enjoyed very much reading of your doings.

"Running Times" is the second most popular running mag in the US to Runners World, and they had a nice article in a recent issue about the Connemarathon, as I'm sure some of you know. In addition to a nice description of the race and its history, they did a nice feature story on Ray O'Connor and how the race was an extension of his interest in running and his life. They also quoted Mick Rice a couple of times in the article.

It was nice to be able to show the article to people here in the USA and say "Hey, these are the guys I met in Ireland!". Brought back a lot of pleasant memories of Streets of Galway and my run around Athenry with Mick and Peter.

I once again want to thank everyone from Athenry that I met for being such gracious hosts on my holiday trip, and wish all of you the best this holiday season. I'll try to keep an eye on things though this site now and then, and I hope to return to Ireland before too long! (Hopefully this old body will still be running)

Good to hear from You Jim!

Hey Jim,
Its Alan the webmaster here.
Great to see that you are enjoying our ramblings.
The site will come into its own when we have all the photos and reports up from the run on the 26th December.
Make sure to come back after that and have a look.