Published in Fields of Athenry 10km on 26th December 2011 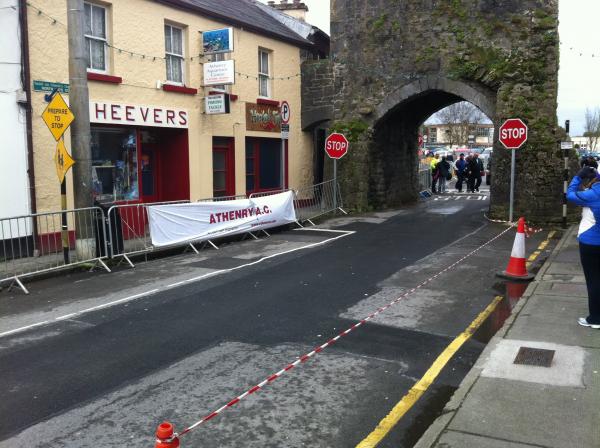 For the first time in 3 years, the Fields of Athenry 10km took its rightful place in the road running calendar. After 2 years of interruptions due to snow and ice, the worst thing that affected participants today was a steady blowing gale, and a little water on parts of the course. But this wasn't going to stop the show going ahead, and well over 1000 runners took to the line to work off the excesses of yesterday's dinner.

At the sharp end of the field, Seán Hehir of Rathfarnham finally secured his name on the back of the top 50 tshirt with a solid run, finishing in just over 31 minutes. This was good enough to hold off Emmett Dunleavy of Sligo AC who finished ahead of last year's winner Gerry Ryan of Craughwell AC.

Emmet actually entered this race over 2 years ago and was unable to make the rescheduled races in early 2010 and 2011.

There was some real quality in the Women's field as Lizzie Lee of Leevale AC travelled from her Christmas base in Westport to take the Women's title with a time of 36:27. She didn't have too much to spare over Clonliffe Harriers' Ailish Malone. In 3rd place was a former Irish junior International, Laura Shaughnessy from Loughrea AC.

The wind make for some hard work on some sections of the course, but a healthy 65 runners make it under 40 minutes, and almost 800 runners in under the hour.

Well done to everyone who took part - I hope you had a great race and we'll see you all again next year.

Well done everyone great job on the day. Congratulations to the Kitchen Team ye did a fantastic job Tae and Coffee worked out great down stairs.