Published in Reports on 3rd July 2016 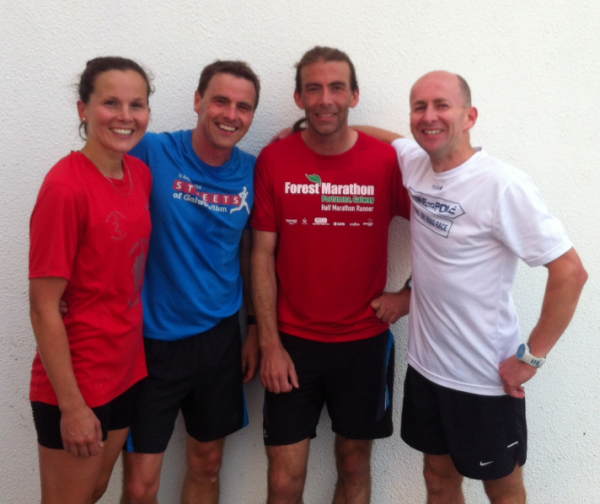 A week after the Athenry county half marathon it was time for a test over a shorter distance. A good contingent from Athenry AC made the trip to the Headford 8K for this lung buster. The first person I spotted was Marguerite Wilkinson on her warm up, looking fresh after her sub 2 hour half in Monivea the week before.   This race bucked the trend of declining numbers with 250 runners turning out on a muggy July evening for a most worthy fundraiser. All proceeds are directly put to use in supporting children with intellectual disabilities. A group of tireless committee members have raised a whopping €45,000 to date which is really amazing!!   As race tactics were being discussed before the 7pm start a suggestion was made to take a leaf out of Steve Jones book to ditch the watches and run on feel.   The lads in the group were unusually silent, Jane Ann made it clear she was out for a hard training run and not racing, so thankfully Regina stepped up to the mark and game on!!   So I threw my watch in the car and Regina powered her one off as we headed to the start line. After a quick race brief we ran through the town of Headford and out onto the main Galway road. At this point the heavens opened and we received an absolute soaking for the next fifteen minutes.   The race was shaping up-nicely with a group of five or six of us trading places for 2nd place over the first 4km whilst we saw the run away winner disappear in the distance. We found out after that Rory Chaser had broken Paul McNamaras 10 year course record by 10 seconds, running an incredible 24:48.   Back to the battle for the other podium spots. The group started to dwindle and at 6km and it was down to Sean Burke (Tuam) Regina Casey (GCH) and I.   No clue how were doing time-wise and not bothered at this stage, the scene was set for the sprint finish. As we turned back on to the main road through the town each of us nosed ahead over the last kilometer.   The three of us gasping for breath passed the finish line within seconds of each other. Luck was on my side and I managed to stay ahead with Sean finishing 3rd and Regina 4th place overall and 1st Female. A quick glance at the clock on the way in and 28:30 was a very welcome sight, PB's all round!   Thanks to Regina for keeping us lads honest and great to see her going from strength to strength!   David Meehan was next home in 29:08 (PB) with Jane Ann hot on his heels in 29:24 and 2nd woman. Chris Deakin also ran a PB in 29:46 taking a prize for 2nd in category. Deirdre Brophy was next club person home in a time of 32:11.   Other runs of note from the club were Adrian Fitzmaurice, Margurite Wilkinson, Daniel Broderick, Micheal McDonagh, Stephanie Duane and Sonia Broderick.   Back to the clubhouse where the coffee and feast of cakes was more than welcome. Chatted to a few clubmates including Adrian Fitzmorris and Sonia Broderick and all agreed it was a race we will return to again next year if we are lucky enough.   *Special mention to the local Headford Care Plus Pharmacy who had a car load of top class goodie bags which included a digital thermometer amongst many other useful gifts. I can imagine that most of us would have warning symbols flashing if we were to use them after crossing the line.   Report by Gearoid Rohan   See photos from Headford, Saturday 2 July 2016, here.

Well done, good report. I've run that quite a few times in the past, hope to do so again.