Published in Reports on 10th November 2008 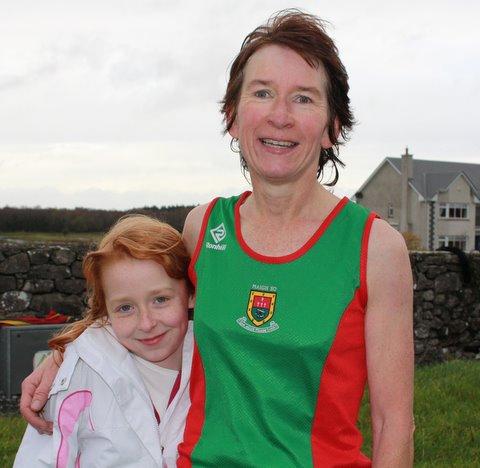 The 43rd Annual Hollymount Road Races took place on Sunday. Once again it was excellently organised by Sean Reilly and his team. It was the eighth race of nine in the C&C Cellular Mayo AC Road Race League. The weather was cold with a slight breeze but thankfully the rain held off. The uphill finish along the main street proved a good test at the end of the womens one lap 3k while the men had to go over the top three times in their 10k race.
Strong club teams made up the nucleus of the 150 who took part in the three races, among them Raheny Shamrock AC, Sligo, GCH, Craughwell, Tuam and Athenry as well as the traditional contingent from Liverpool Harriers and John Moores University. Many of the athletes had competed in the Irish Marathon Championships less than two weeks previously when it was incorporated in the Dublin marathon. Among them were M35 silver medallist Mark Davis (Craughwell AC ) and TJ McHugh (Mayo AC) who won bronze in the same category.
Mayo AC had a fine turnout too, among them twelve of their 18 strong Dublin marathon team. It included most of Mayo AC's bronze medal winning women's senior team. 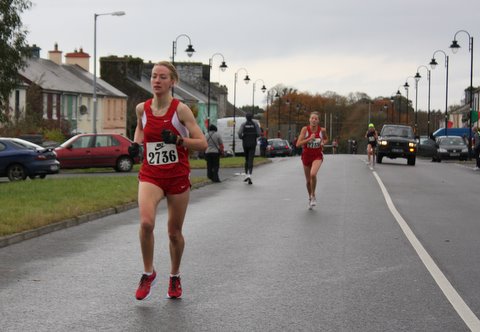 The women's 3k race turned into an exciting battle in the final 800 metres with Mayo AC's top marathoner Catherine Conway displaying great stamina to catch up with the leaders and go on to win in fine style in 10.53. Regina Casey (GCH) was hot on her heels in second in 10.57, followed by Caroline Clancy (Loughrea AC) in 11.06. Kathryn Casserley (Castlegar) was 4th in 11.22 followed by three Dublin marathoners Mary Gleeson (Mayo AC), Elaine Walsh (who led Athenry AC's silver medal winning senior team in the National Marathon) and Edel Reilly (Mayo AC). Finishing in eighth place was Olivia Feeney (Sligo AC) who just beat o40 rival Ann Murray (Mayo AC). Sarah Jackson was the first JMU finisher in 10th just a second ahead of Mayo AC's Kathy Connolly in 12.07.
The team prize was won by Mayo AC with JMU 'A' second.

The men's 10k was an exciting race with three Raheny Shamrock athletes mixing it with two from Sligo AC over the first two laps. However on the third lap Martin Conroy stretched ahead and ran on strongly for a very convincing victory in 31.42, with Bernard Roe and Richard Corcoran from Raheny in second and third place. Emmett Dunleavy (Sligo AC) was fourth and Iain Conroy (Raheny Shamrock) fifth Unlike these five, John Byrne still had the marathon effort in his legs but he made a great effort on the final lap to finish 6th in 33.48. Sligo AC dominated the o40 category with Michael O'Connell and Tom Meehan first and third respectively and Martin Corcoran (Craughwell AC) second.
Twelve club teams took part - 1: Raheny Shamrock, 2: Sligo AC, 3: Mayo AC.
Barry Healy (Claremorris AC) won the u17 boy's 3k race. 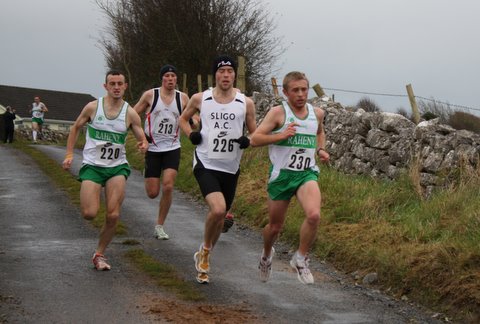 The final race in the 2008 Mayo AC Road Race League will be the Westport 5k on Sunday 30th December. League Prizes (based on best points totals from 6 of the 9 races) will be presented after this race. An update on league table positions will be available before then. 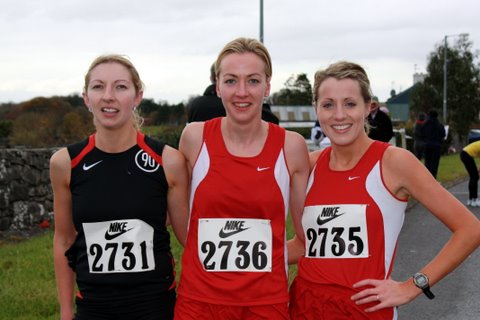 On pretty windy cold day with a tough hilly course, over half the men came in under 40 minutes. I wonder how many other road races in the country can say that?